Dear 14-year-old Min: Some Questions are Meant to be Lived

Creative Chronicles is a series of articles exploring the lives of four Singaporean Creatives. Previously in Series 1, our Creatives shared where they are in their creative journey today through a selection of images. In this Series 2, they revisited a challenging time in their lives and wrote a letter addressed to their younger selves. The letters were then used as conversation starters during our chat with the Creatives.

In this article, we chat with Min, CEO and co-founder of Red Dot. Writing to her 14-year-old self who was dealing with the passing of her friend, Min shares how it was a pivotal moment as it led to her questioning her understanding of life and what she found to be important.

We present her letter and a curation of themes that emerged from our chat. Instead of presenting the conversation chronologically, we delve into each theme through verbatim quotes from various parts of our chat. We hope you find them as insightful as we have. 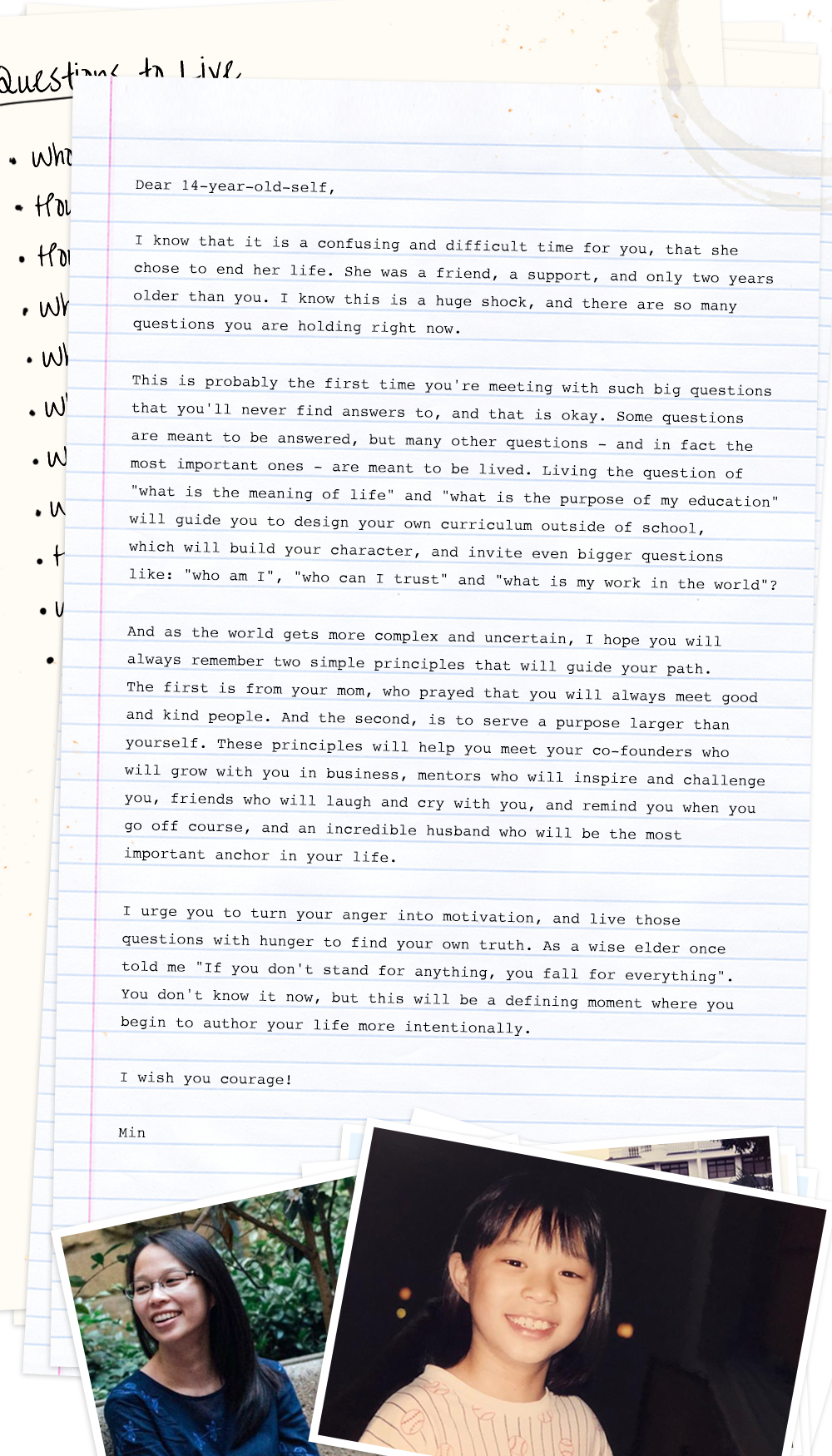 Studio Dojo: Why did you choose to write to your 14-year-old self?

At 14, I was very by-the-book – doing my assessment books, scoring my As, following the rules, and I never questioned that narrative. The passing of a friend completely threw me off the track. She was someone I was supposed to model after. She had everything, which was why it came as a big shock to me. It felt like I had been sleeping and suddenly, there was an awakening.

At that point, I would say that I was not very emotionally literate, and I remember being more head-based rather than heart-based. It didn’t help that people around me didn’t know how to approach it or give closure to it, and so everyone had to find their own ways of dealing with it. As a result, I became rather anti-institutional. I didn’t find meaning in school, and started to reject systems because the real purpose seemed to get lost in rituals and processes that were simply passed down year after year. And I became angry. It was a “Let’s rebel against the rules” kind of anger, where I wanted to test boundaries. You expect me to study? Okay, I’ll take the easiest subjects.

It was truly a turning point because I started questioning things around me and I eventually came to my own conclusion that back then, schools taught us how to ace exams but didn’t teach us how to be good at life. So, I was angry that the whole system was not set up to prepare us to handle life. I then realised that it was up to me to find my own way, and so I decided to design my own curriculum for life. Somehow, I came to this insight that everything in life is in fact done someone as a job. Even in the study of nature, you have naturalists! I figured that through exploring different jobs, I could then study and understand life itself. I remember going to the row of shops opposite my house to find my first job as a waitress – I chose the one with the lightest plates because I was not very strong ha! So, from then onwards till university, I did all sorts of jobs while studying. 10 different jobs, 10 different industries. That was when I really, really learned about life.

Choosing which younger version of myself to write to was not difficult, but deciding whether to share it or not, that was the tough decision to make. I finally decided to share this because I felt that the subject matter is very timely. Around me, there’s currently a lot of pain and death, caused by COVID or otherwise. My friends and I are at an age where their parents are passing, our friends are passing. I feel that death is still something we don’t talk about openly because it’s taboo. But I feel that at this time, it’s even more important to confront death and dying. There are ways to grief (which I’m still learning) and to be with loss, to be in pain and yet, build communities and new openings. It’s a constant reminder of how vulnerable we all are, and that to die well is really to live well. And these are all things that 14-year-old Min wished she knew.

Studio Dojo: What is your biggest learning that you would want to share with your 14-year-old self?

My 14-year-old self was very impatient to get life’s questions answered, I need to know what I want to do by this age, I need to know this by this age. There was always a deadline to have things answered. I think what this letter would do for my 14-year-old self is to give her a bit of grace, a bit of consolation that she doesn’t have to know it all, and that it will take the time it takes. Some questions, you might ask for your whole life and at different points in your life, the answers are different. And there lies a lot of adventure and beauty in living these questions over time.

But, how do you actually “live a question”?

Let’s say, I question – What’s my work in the world? Ask yourself that and look inward. And then you have your first hunch, right? Oh, I feel drawn to animation. Then, do a small experiment to test that out, maybe find a job to test if animation is right for you, or maybe talk to an animator to see whether her life is what you see yourself doing? Once you get some feedback, maybe you will realise, It’s not the animation I like but I enjoy the act of observing things. What else has observation at its core? Maybe birdwatching? Anthropology? Then try the next thing that most draws you in!

You start with a hunch and then do experiments to test out your hypothesis. It leads you to other things but that entire passage is emergent and it requires you to keep asking that question endlessly. And that’s why as time goes by, you may never find an answer but you would have inched closer, and lived a very full and rich life in that process. That’s the best way I can describe it. Would the 14-year-old understand, you think?

Studio Dojo: What questions are you living today?

Some recent questions have been around healthy uses of social media. I am still experimenting; and more generally I’ve been exploring ways to deepen relationships while being physically so far apart from family and friends.

I’ve also been holding some questions in the area of parenting. As a new parent, I’m still discovering my own parenting values, and it’s been fascinating trying out different strategies in responding to my little one. I’m learning that ultimately, how we respond is so much a reflection of ourselves!

But even till today, one of the questions that I’m living still stays the same from when I was 14 – Who am I?

This learning to live a question began in one Money + Meaning circle, where I met a philosopher Jacob Needleman who so beautifully put it this way: “When we are faced with uncertainty, we can respond in two ways—one, in terms of a problem to be solved, and the other as a question to be lived. We sometimes short circuit that great distinction; our problem requires our functions, our thinking, our physical actions, our organizational ability, our emotional sensitivity, but a question is something that draws us inward, to open us to the truth of ourselves—to true impressions of ourselves, so that eventually the questions become mysteries. And a mystery is an unknown that attracts another energy into us if we can live with it.”

It suddenly dawned on me that as an entrepreneur, I was so used to looking at questions as problems to be solved. It had become my way of being, and I had to learn that great distinction.

So, who am I? We all have so many identities and with big changes – moving to Mauritius, being part of a different community, being a new mom – that question keeps evolving. And that’s something I still ask myself every year. So yeah, the questions I’m living haven’t really changed but the experiments change all the time. Culturally, I feel that perhaps, this might be a more Asian view to see things as they are, rather than to always see things as problems to be fixed. There’s beauty and balance in the mystery and living it, and that’s something that I only discovered a lot later in life.

Catch up on Min’s articles

Studio Dojo helps leaders, organisations and communities build the capacity to be more creative, courageous and purposeful, so that together we can do more good for the worlds we live in.